On the difference between men and women – Part 1: are men stronger than women? 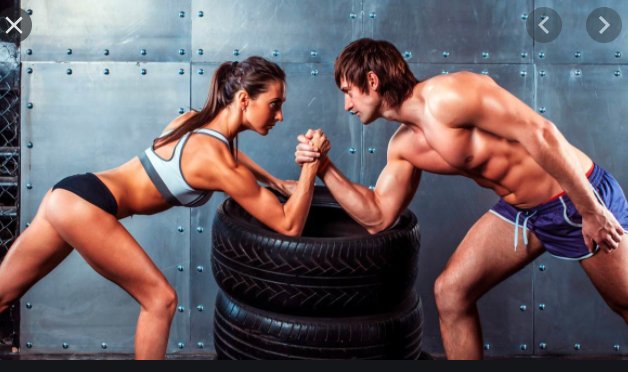 This somewhat peculiar article will not only aim to explain how training should differ depending on one’s gender.

Here I would like to try to answer the question why, but especially how, men are different from women. At first glance, the answer seems straightforward: the difference in sex comes with specific characteristics that make childbearing possible, including hormone levels. We will see that it is not that simple, because we have to take into account an unexpected fact: the socio-historical context.

However, this is a bit reductive. The first criterion is genetic: These are the chromosomes. Everyone knows that females have an XX chromosome pair and males an XY pair (rare variations are possible: XXY, XO, XYY, XXX, XXXY, XXXXY karyotypes). During fertilization, the woman provides an X chromosome and the man either an X or a Y chromosome (it is the chromosome provided by the man that determines the sex of the child). In the first weeks of pregnancy, the sex is not yet determined. The embryo then evolves under the sole influence of the X chromosome, until the activation (if present) of the Y chromosome, between the 6th and 12th week. This activation will then determine the male hormonal system, which will allow the development of the reproductive organs, which were until then neutral (androgynous). Without this activation, the reproductive organs will evolve to become female.

To simplify the hormones: men have greater concentrations of testosterone, which will allow them, among other things, the development of the genitals, the distribution and growth of hair, the voice (deep), masculinization of the face, as well as sperm production and healthy prostate function. Women have higher concentrations of estrogen and progesterone; these two hormones are involved in ovulation processes, the development of the uterine lining to accommodate a potential embryo, optimal body heat during pregnancy, etc.

Testosterone, in much higher concentration in men, has well-known anabolic effects, and are also linked to strength gain (moreover, muscle development necessarily leads to the development of strength. Because more muscle grows, the further the insertion of the muscle on the bone moves away from the joint, which increases the leverage).

Since women have less testosterone, we often hear that the role of this hormone is solely responsible for mass and strength, so it is normal for women to be generally weaker and less muscular.

But that’s ignoring the fact that studies of women, including trained and professional women, show that they gain as much percentage of muscle, muscle volume, and strength as men (see also: The natural muscular potential of women , from which I am inspired for this part of the article). Basically, a 1.70m man who has 50kg of lean mass will not gain more muscle than a 1.70m woman who has 50kg of lean mass (why am I talking about lean mass and not total weight? Because proportionally, the woman naturally has a higher rate of essential fat, to meet the needs of the female reproductive organs; talking about total weight would therefore not be wise).

But how is this possible?

The answer is simple. On the one hand, estrogens, present in large quantities in women, have a number of beneficial effects for muscle gain: help muscle recovery (women require about 24 hours of recovery between each workout for a given muscle group , when men need at least 48 hours), have anabolic effects and are anti-catabolic. On the other hand, women are more sensitive to the effects of growth factors like IGF-1 and growth hormone (which is three times higher in women than in men). These two data explain how the lack of testosterone is balanced for women.

However, one cannot help but notice that men generally have more muscle and strength than women. This can be explained (again based on the article by Menno Henselmans cited earlier) by:

To sum it up so far: the capacities for building strength and muscle mass are equal for women and men. The differences are explained by the social context, and the starting point.

How to explain the differences in stature?

Let’s talk about this starting point! Indeed, although proportionally speaking, women have the same capacity for muscle growth, if men are taller, then they will always be absolutely more muscular. . Likewise, if the relative force (which takes into account the weight of the body) of women is equal to the relative strength of men, the absolute force (the amount in maximum kilogram) of women will be lower if one takes into account the fact that women are generally smaller, lighter.

During puberty, the male individual sees his shoulders widen and his skeleton (and therefore his musculature, whose size depends in particular on the space available on the skeleton) develop more than in individuals of the sex feminine. Made solely from the effect of testosterone?

To answer this question, I refer first to the work of Priscille Touraille in her book Tall Men, Short Women: A Costly Evolution. Gender diets as a selective force for biological adaptation . To sum up: For millennia, protein was generally reserved for men, while women had to be content with nutrient-poor leftovers and broths, which is not without consequences for body constitution. Especially since women experience a higher energy cost due to menstruation and pregnancy. Food is indeed capable of genetic modification via the intestine (epigenetics). It is therefore possible to transmit this particularity to future generations. This could also explain why current generations are generally always taller than those of our ancestors: the means of production are changing, access to food, and therefore greater availability of nutrients, is improved.

To this I would add the role of natural selection: due to their higher reproductive potential, physically larger males are favored during evolution.

In any case, this is an evolutionary aspect, not an original and permanent aspect.

Note that however, sexual dimorphism in humans is morphologically very weak; in other words the difference in size and weight is not very significant, all the more if one compares with other species of mammals (this is even more noticeable by comparing with certain species apart from mammals, like birds).

It is often accepted that men are stronger than women and women are more enduring because prehistoric men were intended for hunting, which requires more power and strength, and women intended for gathering which asks to climb and pick for long periods. I find this reasoning a bit far-fetched because hunting can also require a lot of endurance just as climbing also requires strength; but above all, this view of separate tasks only seems to reflect the organization of our modern society (the man brings the food [the money] and the woman takes care of the garden). However, a recent study strongly questions the distribution of roles in prehistoric times. “Between 30% and 50% of big game hunters may have been women. This new study is the latest twist in a decades-long debate about gender roles in early hunter-gatherer societies. » This further supports the idea that the differences in physical abilities are more the result of the organization of society through education (possible or not access to certain sports depending on gender, according to the laws in force [in some countries], traditions, customs).

Men and women are different in many ways, influenced of course by genetics, but also, more surprisingly, by the socio-historical context. However, in terms of muscle hypertrophy capacity and strength, the gender gap is smaller. Can we then schedule the same type of training for women as for men? No. I will cover this point in the next article, which will detail why the program deserves to be different based on gender, and how to set it up.