It is well known that consuming lemon juice is good for the liver because it “detoxifies”.

I will write this article in three points in order to analyze this received idea:
1 – The role of the liver in the body
2 – The concept of detoxification
3 – The real effects of lemon juice on liver health 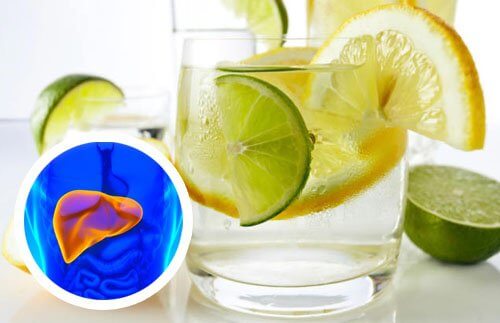 1 – The role of the liver in the body

The liver is often seen as a filter which allows or not to pass the ingested elements in the body.
Seeing the liver as a filter is actually quite simplistic.
First of all , after passing through the stomach, the food bolus passes into the intestines, but before it undergoes various transformations, operated by the pancreas and the liver.
Pancreatic juice reduces carbohydrates into simple molecules, lipids are also divided , and the proteins are reduced into amino acids.
The bile, secreted by the liver, again divides the lipid molecules.
The intestinal juice will complete this transformation process.
This is when the molecules present in the intestine can be absorbed by the body, through their villi.
The rest of the food bolus will be evacuated by the large intestines.

You will understand: to use the expression used in the Pharmachien’s video on liver detox, the liver is not a filter, but a real transformation factory.

After passing through the blood, certain molecules return to the liver: the carbohydrate molecules fill the hepatic glycogen stores.
Amino acids also come to the liver.

2 – The concept of detoxification

The term “detoxification” means ridding the body of toxins. However, the presence of toxins in the body affects very sick people and people addicted to drugs, tobacco and alcohol.

This is the same kind of confusion as when we talk about body acidification (acidosis is a very serious disease). See this article: The acid-base balance

The term “detox” would make sense if it simply meant helping the liver to perform its role of processing the elements ingested in order to maintain good liver health.

In other words: improve bile production, ease digestion and counter the harmful effects of too rich a diet. We are far from the meaning of the term “detoxification”!

Unfortunately, a lot of industries sell us products using fear: “Watch out, your body is toxic !! Quickly you have to clean it with our super detox tea or else you’ll have a body full of yucky stuff in it! “(But what exactly? We don’t really know. Toxins maybe? Well not really, since it only affects a part of the population in very poor health.)

3 – The real effects of lemon juice on liver health

Lemon juice is not used to “detoxify”, you will understand.

On the other hand, it has two notable effects on liver health:
– it boosts bile production
– it protects against the effects of oxidative stress induced by exercise ( Lemon flavonoid, eriocitrin , suppresses exercise-induced oxidative damage in rat liver )

Conclusion: how to take care of your liver on a daily basis?

– You can drink diluted lemon juice to improve bile production
– Do not eat too much fat: lipids slow down digestion. Be careful, however, to consume a minimum of 1g of lipids per kg of body weight (for example 70g of lipids if I weigh 70kg). Note of 12/17/19: it seems that the recommendation of 1g / kg of body weight is not a valid basis, since each organism has its specific needs. On the other hand, this recommendation emphasizes the fact that it is important to have a good balance between each macronutrient in order to optimize your health.
– Limit your alcohol consumption.
– Consume at least 3 cups of coffee, to reduce the risk of liver disease (hepatitis, liver cancer, cirrhosis, etc.) linked to food and / or alcohol consumption. Decaffeinated coffee has the same benefits without the sometimes negative effects that caffeine can bring (poor digestion, nervousness, etc.)